`
I added a new measurement that will help residents understand the Rad. The Rad is with us all 24/7 constantly. It never goes away. It is better to know what the Rad level is than to not know.
`

Everybody and everything in the States absorbs a certain amount of the rad every minute. The total Rad number People are exposed to and how much Rad folks absorb is an individual thing that can vary.
`
Year to Date Radiation Measurement by City is a First for Bob Nichols and VT. Software and hardware computer upgrades make it easily accessible for interested residents.
`
Look up your city or a city near you on a RadNet Rad Monitor right away. Know your Rad Number!
`
Everybody absorbs the Rads, the number a person gets varies. The more people get, the quicker they sicken and die. It is just that simple … and the Rad is a forever thing that will kill you and everybody you know.
`
Bests,
Bob Nichols
Writer
`

Nichols on Nuclear Videos for You

Visit the Your Radiation This Week Year to Date video channel and peruse the Nichols on Nuclear playlist to see these, and other maps of THE RADS IN AMERICA- MAPPED!  and much more.

Showing 1 to 97 of 97 entries
Previous Next
[The Sortable TABLE OF POISONED AMERICAN CITIES is available at the Bob Nichols Column at Veterans Today site.]

These are the 24 Hour a day recorded Total Gamma Radiation in CPM and Sievert measured highs affecting people around the United States.

Watch for: Coming up soon. Trying to have kids? The Fertility Rate in the States is Clobbered by the unrelenting Rads attack on Sperm and Eggs, not to mention Zygotes and Fetuses.

YRTW ELE is published every two weeks on Saturday. ELE is an acronym for “Extinction Level Event.” The amount of Rad in the air now Dooms Humanity to a relatively quick Extinction.

Done In by our own war toys and electric utilities with nuclear power plants, how moronic is that! I can’t say it any plainer than that. The next publication dates are September 9 and September 23, 2017 on the Road to Extinction.

Be prepared for a shock, these Year to Date totals are really big radiation numbers.

The Rad numbers are your guide to your  exposure to the Rad. How much you already absorbed in your daily life  is really hard to find out. The Nuke Labs know how to do it, of course; but they aren’t telling unclassified residents.

Especially hard hit are the cities listed in YRTW YTD ELE.   See the latest Your Radiation This Week or TOTAL GAMMA RADIATION report for the most recent list of the 98 reporting contaminated cities including Toneri Metropolitan Park in Tokyo, Japan.

New Rad Measurement. Year to Date, 24 Hours a Day Rad measurements are added to the report for all reporting cities every two weeks. Rad Counts, called CPMs, are in the millions everywhere in the States.

The Table of Poisoned American Cities is changed. A new Column labeled “Tokyo Equivalent Rads” is added.The acronym is designated TER, the plural is written TERs. One TER is defined as the nSv/Hour measurement at the Rad monitor in Metropolitan Toneri  Park in Tokyo, Japan.

The Tokyo nSv/Hour Rad reading gives you an instant and direct comparison of your city to the Rad Monitor in Metropolitan Toneri Park in Tokyo, Japan.

Shearon Harris was a miracle man. He peddled nuclear poison to the simple people of North Carolina and they bought the lie hook line and sinker.

As a result, the leaking Westinghouse nuclear reactor pushes Raleigh to the very top or near the top in every Bad, Bad CPM list published by YRTW in VT.

Rad Readings Source: RadNet, A Directorate of the US EPA.

What? Sue TEPCO and the Government of Japan over Fukushima Daiichi … and Win! Incredible! You bet your bottom dollar!

Lead Attorney Katsuyoshi Suzuki is the Super Lawyer who beat the combined forces the Tokyo Electric Power Company [TEPCO,] a huge corporation and the Japanese government. He and the legal team are to be applauded world wide.

The District Court ordered “the two to pay damages totaling ¥38.55 million to 62 of 137 plaintiffs from 45 households located near the plant, which suffered a triple meltdown caused by the tsunami, awarding ¥70,000 to ¥3.5 million in compensation to each plaintiff.”

As one person wryly observed “it’s a judgement against a shell company and a bankrupt extinct-ed country. So what? there is nothing there.”

As they say, we will see what happens. The Japan Times said “In first, the ruling was the first of 30 similar class-action suits filed nationwide involving more than 10,000 plaintiffs.”

YRTW ELE readers can read the Japan Times article “In First, Government and TEPCO Found Liable for Fukushima Disaster.” Anyone can lookup the case on my Soc Media accounts. See under “Resources” below.

Copyright by Bob Nichols @ 2017: Reproduce and distribute. Give full attribution to Bob Nichols at duweapons@gmail.com 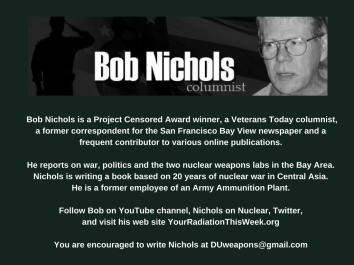 This is a public service message brought to you and yours via Lucy Occupy and Friends.

See new videos at tinyurl.com/YRTW-Video and read the current articles at

PS Continue to #DodgeTheRads — it is increasingly dangerous out there…

WE ARE THE MEDIA NOW