NOTICE: I have determined that it is necessary for Public Health and because the many nuclear reactors are Venting radioactive gases and Steam at nights and on weekends that all residents must stay inside at nights and on weekends. Especially hard hit are the cities listed as above 1000 CPM by the EPA (Environmental Protection Agency.) See YRTW for a recent list of Contaminated Cities. – Bob Nichols

(January 14, 2017) – Good Day, this is “Your Radiation This Week” for the past 2 weeks. These are the Recorded Beta and Gamma Combined Radiation Highs that affected people around the United States. YRTW  is published every two weeks on Saturday. The next publication dates are January 28, 2017 and February 11, 2017.

From December 17 to December 28, 2016 the deadly nuclear radiation decreased all across the United States. Only 36 American cities recorded Rad Reading greater than 1,000 CPM…..

…..The rapid decrease in radiation readings happened because most of the 104 nuclear power plants in the States were turned down to an idle or Switched Off.

As high cost electricity reactors go back on line the killer Rad will spread across the continent yet again – on purpose….

…This is Murder by nuke electricity plant – plain and simple. “The Nuke Corporations’ Boards of Directors and Executives are Guilty of Conspiracy to Commit Capital Murder in the First Degree. Employees are just their unwitting Pawns….

See New Video: All Reactors Leak All Of The Time

Nichols on Nuclear – Fukushima and More

Copyright by Bob Nichols @ 2017: Reproduce and distribute
Give full attribution to Bob Nichols at duweapons@gmail.com 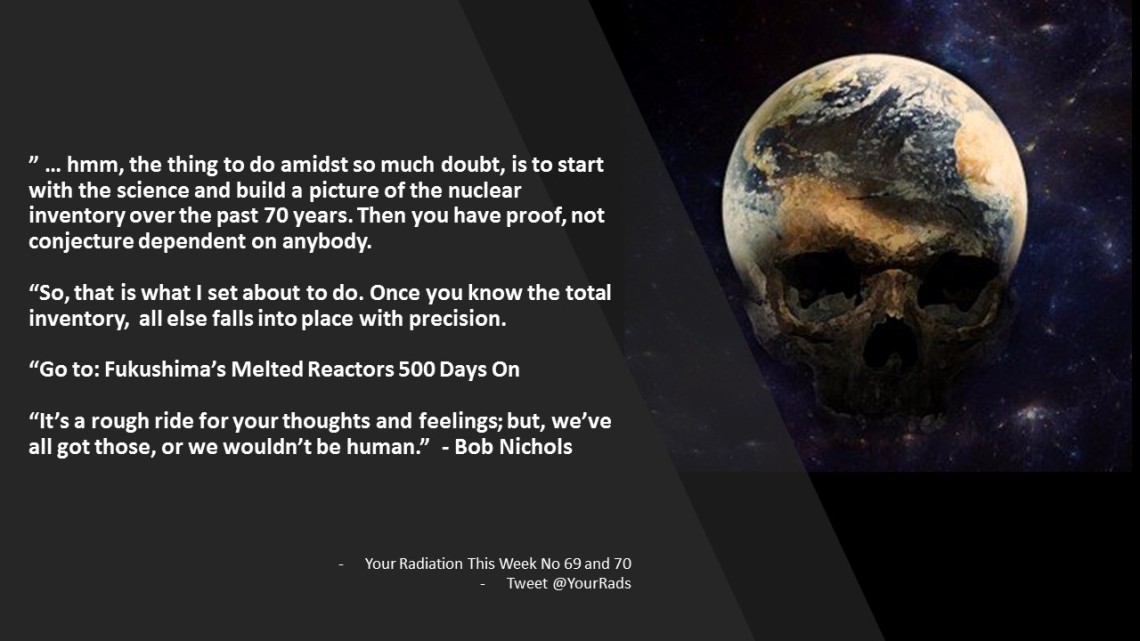 Bob Nichols Said WHAT Else!?!

“Start With The Science”

“Bob Nichols Said WHAT about YRTW!?!”

FOLLOW THIS BLOG to get regular email updates or simply ‘Google and Share’ Your Radiation This Week directly from the author’s page on the Veterans Today site. Reblog, per stated copyright permissions.

This blog is a public service announcement to the Unsuspecting Public, brought to you with goodwill via Lucy Occupy and Friends, in compliance with copyright permissions.

More about the Snowflakes and Radiation?  See YRTW NO 38.